The famous Sri Chowdeshwari Temple is presided in Cholasamudram village of Lepakshi Mandal, Anantapur District in Andhra Pradesh State. There are no exact proofs who build this temple. The structure of the temple seems to be so old around 700 years.

In all “saiva alaya’s” there will be a statue of Nandi (Bull), but in this temple the mandapa is empty. The temple is built in the period of Chola’s while development took in Vijayanagar period. 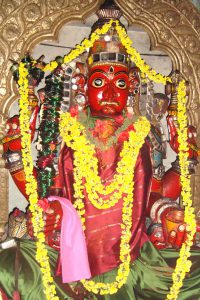 The main shrine in the temple is made up of “Gachu” and applied colors. The statue is around 8 feet in height. The deity in the temple is sculptured on the big dais. The shrine is very fury with 4 hands. Right hands with “Trisulam” & “long sward” and “Dhamaruka” & “Kunkuma Bharine” with left hands. Demon heads are under her feet. People believe that Goddess Parvathi is residing in form of SRI CHOWDESHWARI DEVI. So many Royal families from ancient days were worshipped with great devotion.

The inscription in the Temple: 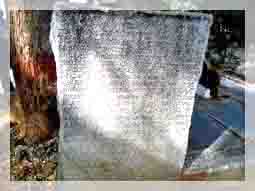 This is incomplete and dated Saka 1439, Isvara, Margasira, ba. 3, corresponding to A.D. 1517 December 1 Tuesday (not verifiable), in the reign of Krishnaraya-Maharaya, king of Karnataka. It mentions his queen Tirumalambika and records that Rayasada Kondamarasayya, son of Mantri Timmarasa and grandson of Sripatyacharya, of Bharadvaja-gotra, Asvalayna-sutra and Rik-sakha, made some gift for the service of the goddess Chaudesvari in Cholasamudra in order that the kin may be blessed with children. Kondamarasayya is stated to have been an expert in reading various scripts, His grandfather is described as a very learned man and observer of the four religious orders, Brahmacharya, Grihastha, Vanaprastha and Yati, as the ornament of the Udayagiri-Kannadiga-kula and as the chief of Podatur in the Dravida-desa.            (A.R. No. 87 of 1912.)

(On a slab set up in the court-yard of the Chowdeshwari temple at Cholasamudram, Hindupur taluk, Anantapur district.)

Tuluva Sri Krishna Deva Raya also known as Krishna Raya (1509-1529 CE), was the famed Emperor of the Vijayanagara Empire. Presiding over the empire at its zenith, he is regarded as an icon by many Indians, particularly by Tuluvas, Kannadigas and Telugus. He was one of the greatest statesmen which medieval South India had produced. The temple is very old temple that has been around for about 700 years now. The inscriptions in the temple indicate the construction of the temple by HariHara and Bukkaraya the chief Patrons of the Vijayanagara Empire.

The east entrance is the main entrance to the temple. To the east of the temple, there is a Mandapa. Devotees perform Pallaki seva to the deity In this mandapa. The mandapa slightly bent to left side. It occured when the floods hit the mandapa very long back. Even after the incident the mandapa still strong and Pallaki seva continues…